Originally from Misrata, Aimen Ajhani is the 25-year-old Libyan street artist who is set on chasing a big dream – to keep up the artistic political-resistance movement that began in Tripoli, Libya when he was just a teenage boy. His activity then started by creatively engaging against the repressive system which had threatened not just his freedom of expression but that of his entire generation and killing off their innocent aspirations.

Inspired by the history and philosophy of the hip-hop counter sub-culture that originated in 1970s New York, Ajhani was part of a group of about 300 youths that included five girls. They used to gather in central Tripoli streets to practise their breakdance, rap-songs and spray the walls with graffiti as a way of voicing and exorcising their fears, worries and frustrations. Their collective journey would take many twists and turns from before to during and then after the February 2011 Revolution. 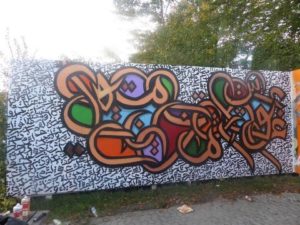 I quickly felt Ajhani’s great defiant energy as he opened up to me via Skype about the personal story that started circa 2007 in Tripoli, but has landed him in Denmark, where he is currently resident. Although he is working mainly as a graffiti artist, he is still determined to keep up the struggle that has had to be adjusted to an entirely different cultural, social and political context.

Ajhani: “I started as a break-dancer before the Revolution but eventually discovered the power of Graffiti to make a political statement. I was a member of different crews – including the Bugs Bunny, the Sharks and the Ninja Crew – but at that time it was all underground and funny because we were always running away from the National Security.

“Some of us even got arrested as we were accused of bringing a poison culture to Libya. They called us different names and big words but we were just dying to practice. Even just to buy colour spray cans, there was worry we were going to write something against the system.”

Emboldened by the energy of the Revolution, Ajhani’s first official graffiti was the word ‘Libya’ painted on a wall on 1st September Street – now renamed 24th December Street – in Tripoli. This was followed by his most original signature stencil of ‘Fatima’s Hand’ that basically sticks up the middle finger at the repressive regime and the ‘Owl’ that appears to ironically state ‘Hear No Evil, See No Evil, Speak No Evil.’ 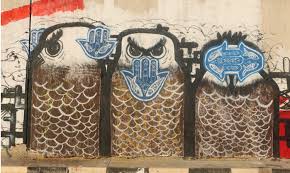 Ajhani: “During the Revolution, it was all good as we got some positive attention and people started to accept us somehow. We even created a small organisation called ‘Art of Expression’ that took part in many art and dance events and bringing some rappers and MCs to sing. Some of this was to raise money for people who lost their loved ones. I also took part in a mural project called ‘Flame of the Capital’ that was against domestic violence.”

He at this point began to develop his graffiti by constant practice and using various techniques and styles. He fully participated in what seemed a lively hip-hop art scene in Libya when the youngsters could finally express their hopes and dreams for a better future; and, when their artwork and performances for a short time signalled a positive aspect to the revolution. They no longer had to be underground but could be publicly celebrated.

Liaising with others based both in Tripoli and Benghazi, he became known by his signature of ‘Elbohly’ that he still uses to sign off his work today. His rebellious graffiti became the colourful background wall to many music videos of Libyan rappers and dancers. He mentioned the names of several crews, DJs and MCs that included: MC Sweat, MC Squad, MC Black Tiger, Good Against Bad ‘GAB’ crew and Razor Record.

Ajhani: “They called me Elbohly which means the crazed one. It started with the graffiti because whenever I do something, you can talk to me or call me but I will never listen to you. When I am in, I am in…. “

But sadly for him and his hip-hop mates, their big hopes were soon crushed as the political situation began to escalate in a newly menacing direction. The threat this time was not the Gaddafi regime but the religious radicals – mainly the extremist group ‘Ansar Al-Sharia’ – who began to hound them, questioning what they did and branding them as unbelievers committing haram.

He said: “As Libya’s youth we just needed to express ourselves but it has become scary and risky once more. Also, I don’t want to make it look bad, but many of the youngsters have turned to drugs in desperation. The only other person I can speak for is my friend Ryan. He and I share the same dream to spread and develop the hip-hop culture. At the moment, he is based in Tunisia with the B-Boys Crew from North Africa. We are the only two hard core mother-f***ers who will finish what we started.”

Ajhani fate would also take an unexpected turn, as his graffiti work had caught the eye of a Danish organisation called ‘Turning Tables’ whose aim is to empower marginalised youth globally by encouraging expression through music and film. They invited him to take part in an ‘Images Festival’ in August 2013 in Denmark, where Ajhani was the only Libyan with a few others representing Tunisia and Egypt from North Africa.

At one point, Turning Tables had visited Benghazi and helped to produce a video clip with MC Sweat in 2011 and in January 2012 supported a ‘Rebirth Music Festival’ focusing on the liberation of creative expression in post-Gaddafi Libya when at least 2,00 people attended. They had also planned to give workshops but Ansar Al-Sharia threatened to kill them and confiscate their equipment, so they left and travelled back to Copenhagen.

Now in Denmark he no longer has to run from any authority when making his graffiti. He even expressed glee and surprise at how easy it is to ask for permission to do work in public spaces and that he gets commissioned and paid to do it! With Arabic calligraphy now being one of his style fortes, he is thriving as an artist and offering something quite unique for a European audience with what he refers to as ‘Calligraffiti’.

He said: “It is now a great chance to represent my culture in a good positive way. Whenever I do something, I like to hear what people have to say. Instead of the traditional graffiti with English lettering, I am doing something different so people can see that the Arabic and Islamic culture can be artistic and that it is not all bad as you might think.”

Presently Ajhani is involved with several street art projects that include three recent murals in Ringsted and one mural dedicated to the 18-year-old Libyan peace activist Tawfik Ben Saud who was killed this year in Libya for speaking up against extremist groups. The latter is a tribute to those who continue to fight for freedom, rights and justice in a dangerous environment. 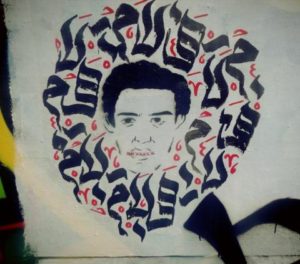 Recently, also, he has started to experiment with painting on canvass and drawing on the Callgraffiti and using it to create and manipulate form out of the written message. One of his latest works, for example, is based on a Rumi poem. A first canvass exhibition is also on its way, whilst teaching calligraphy in schools in Denmark and looking forward to taking part in the ‘Shubbak Festival’ in London in 2015.

Lastly I asked the artist if he is likely to return to Libya and how he feels for the friends he’s had to leave behind. He said: “It is depressing but there is always hope in people. I will go back one day to do workshops for the young ones. It will also be a great chance – if after this crazy civil war – to do big murals in open places. For me, as long as I am doing something and complaining, I am happy. I want to show the world that I am not sitting doing nothing because otherwise Libyan people give up too easy.”

Note: This article was first published circa September 2014